Platform Tennis is traditionally played from November to April, but can be played at anytime throughout the year. It is a doubles only sport governed by the rules established by the American Platform Tennis Association(APTA). The sport is affectionately referred to as “Paddle” tennis and is a great cardio sport that is growing rapidly.

Rules of Paddle Court Use

While you were sleeping in, a group of intrepid Paddle Tennis players braved the early hour and the foul weather on New Years Day.  Old Farm Swim and Paddle community hosted their 1st event of the new year.  Players included Harris Rosenblatt, John Beach, Beth and Kent Hunter, Tim Harper, Dean Burch, and Ed Staunton.  There is a high probability there was some “hair of the dog” involved… 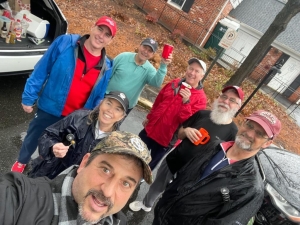 Old Farm Swim and Paddle Tennis Club hosted a mixed invitation Paddle Tennis tournament on November 20, 2021.  The tournament consisted of 16 national high-level teams.  The weather played out perfectly for a late November tournament.  A special thank you to the tournament sponsor, Congressional Commercial.

The lead-up to the finals played out to chalk, with the #1 and #2 seeded teams of Trevor Spractlin (River Bend) and partner Del Owens (Congressional) going against Chris Chiu (Old Farm) and Erin Ortiz (Chevy Chase).  The final was a fierce non-stop battle for the crown. In the end, the # 2 seed of Chiu/Ortiz team prevailed over the #1 seed team, 7-5, 6-4.
Pictured below are 3rd place winners Julie Maner and Guga Goncalves of Chevy Chase who won beating Taylor Newman and Neville Brodie of Chevy Chase and Woodmont respectively. 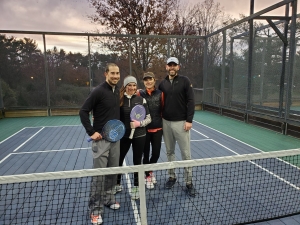 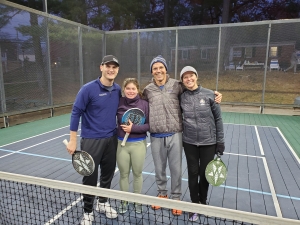